Live so that when your children think of fairness, caring and integrity, they think of you.

I stepped into a teaching position at school that was recovering from a horrific bullying incident. Incident doesn’t quite do justice to this life-changing event; life-changing for the instigators and their families who faced court, certainly life-changing for the victim of the attack. A group of boys thought it would be … I don’t know … fun? … to abduct and torture a classmate, a peer, a fellow human being in bush-land near the school. For hours they tortured him, pissed on him, tied him up, made him dig his own grave, psychically assaulted him … He was a vulnerable kid – skinny and small for his age. They were taller, bigger, stronger and had a lot more friends.

I have found myself thinking about this event a lot over the last week or so – particularly in relation to the ridiculous language and downright disgusting behaviour of the so-called leaders of this country.

“You don’t want a wimp running border protection, you want someone who is strong, who is decent and Scott Morrison is both strong and decent.” Prime Minister Tony Abbott (Feb 21, 2014)

It is bad enough that our Prime Minister is using such juvenile, throwaway language better suited to a “jock” in a John Hughes film than serious humanitarian issues; it is incredibly disturbing when we consider the actions of Scott Morrison and the government.

So, what does it mean when Abbott makes such childish comments? If Morrison isn’t a wimp then what exactly is a wimp? Is a wimp someone who shows compassion? Someone who is not prejudiced? Someone who helps the vulnerable? Someone who tells the truth, is honest, is kind, is empathetic …

By Abbott’s standards I would much rather be a wimp.

What does this mean in the playground? I’m not even sure the word ‘wimp’ is still part of the colourful vocabulary of school-yard bullies but let’s imagine, if you will, that it is. “Don’t be a wimp” translates to don’t defend that kid who needs your help, stick with bullies, hurt him, he deserves it, he is the minority, he is different, he doesn’t deserve friendship / kindness / help …  No one wants to be a wimp because, clearly, it takes integrity, strength of character, compassion to be a wimp. It is difficult to be a wimp.

I wish there were more wimps in the school-yard. If there had been some wimps around on that life-changing day at that school by the bush then maybe a child would not have suffered. Maybe one of those bullies would have had enough wimp in him to stop his friends hurting an innocent, vulnerable kid.

If there were more wimps running this country then maybe Reza Barati would still be alive. Maybe we wouldn’t lock up the vulnerable who have turned to us for help not persecution. Maybe we wouldn’t be creating a country that is intolerant, cruel and selfish but a place that values equality, peace and compassion. 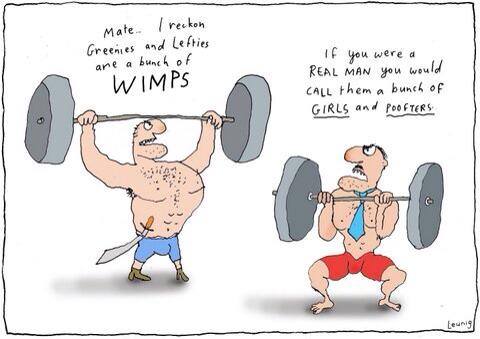 © Katy Warner and katywarner.com, 2013 – 2022. Unauthorized use and/or duplication of this material without express and written permission from this blog’s author and/or owner is strictly prohibited. Excerpts and links may be used, provided that full and clear credit is given to Katy Warner and katywarner.com with appropriate and specific direction to the original content.