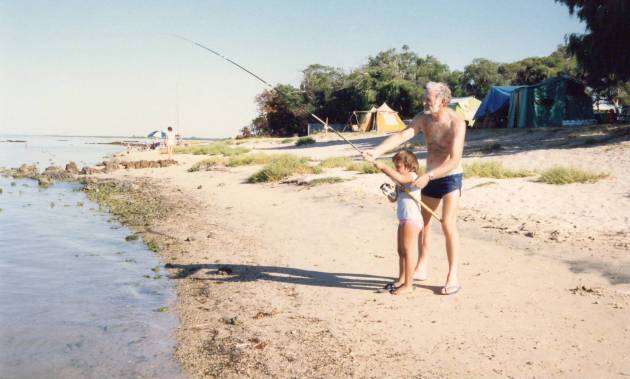 We all headed to the spot we thought was the spot where, as children, we played on the beach for a week in February. It looked different but Dad worked out a path from the tree he remembered which I said I remembered but I don’t really know if I did.

The asbestos chalets and caravan sites were gone, replaced by two-storey mansions with balconies and timber decks and six-burner stainless steel barbecues and expensive cars in double-garages and signs warning people not to enter beyond this point because this is an exclusive resort for the people who can afford it.

We squinted as we tried to look through the mansions; superimposing over their imposing structures with the little green asbestos chalet we’d call home for week in February. It was hard to imagine but I desperately wanted to get it back. That’s when Dad said that tree was the tree that was once in front of the chalet we’d called home for a week in February, and that’s why I said I remembered it when maybe I didn’t …

We traced a path from the tree Dad recognised to the beach and all agreed that this was the spot; our little plot of sand and sea that was our beach for a week in February. The beach looked smaller now, the sand not as white, water not as clear. But it was the spot. We all agreed. It was too cold to swim so we stood in the water and I sang that stupid song that we made up one holiday which we all found hilarious back when we were four and five and eight and ten but now it simply made my 12-year old niece look at me with that funny eyebrow thing she does when I make a joke.

We weren’t all there, my brother had plans and one of my sisters had just had a baby, but it was still a good turn-out. We were all staying in this new two-storey holiday house which lacked both character and enough bathrooms. I wanted it to be the same as it was back then but it wasn’t; we couldn’t hear the waves as we fell asleep, there were no bunk beds, no early morning runs along the beach with Grandad, no card-games, no jelly-fish stings, no straining our ears to hear what the adults were talking about when we reluctantly went off to bed. We are older. We are adults. My sisters now have their own families to bring here or somewhere like here and make new memories.

On our last morning I went out for a run to retrace the steps we would take with Grandad on his morning jogs during these annual family holidays. He would jog, or attempt to jog, whilst we got distracted by the treasures that had washed up on the shore overnight; shells and sea jelly and cuttlebone and seaweed.

I ran to the point he would run to. It seemed a lot further out when I was eight. I walked out onto the rocks and waited for a sign. For something. A vision. A rainbow. A dolphin leaping into the sky. Even just a slightly different wave to break up the tempo a bit. I breathed in the fresh, sea air and waited … But the waves kept on in their hypnotic rhythm, the sky was clear and the dolphins weren’t playing along.

I had desperately wanted a new memory, a significant moment, to sit alongside all the memories I had of this place. I wanted something that would reinforce the importance of our time spent here all those years ago. I wanted to feel as if they hadn’t gone; my Nan, my Grandad, those childhood memories.

I ran back to the house to find my niece waiting for me. Everyone else was asleep. She was up. And dressed. And waiting.

We went back to that piece of beach which was our piece of beach. We threw our shoes off and walked on the sandbars. They still felt like they could go on forever, into the horizon. We marvelled at the flat sea and the colours of the sky. She drew her name in the sand. We collected handfuls of shells. We walked in the freezing cold water until our feet ached, and then went back for more. We talked and laughed and told stories. We watched old men walk their old dogs. We walked and walked without getting anywhere in particular. There were no dolphins or rainbows or visions but it didn’t matter; I loved that morning spent with my niece.

I couldn’t recapture the childhood memories of that place but I did get a new memory – something that will now sit alongside those older memories.

That simple morning beach walk – I hope that will become a memory for my niece and one day, in twenty years time, she revisits this place that was hers for three days in December and builds another, new memory to sit alongside it … and so it continues.