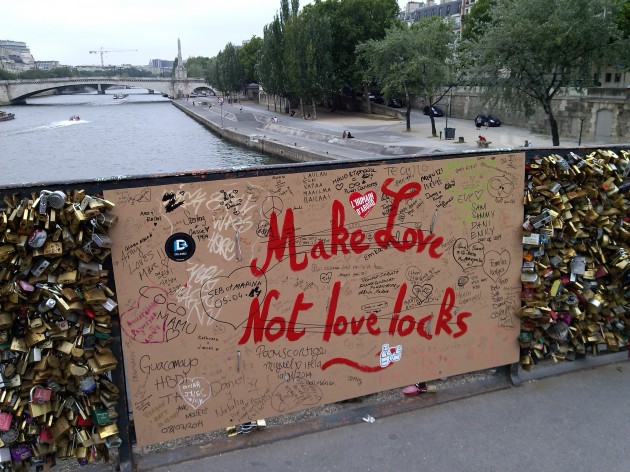 This is a true story.

I was in hiding. Or trying to disappear. Or both. Something like that. You get the idea.

I was eating 500 to 800 calories a day because that happens sometimes and I was running a lot and living alone and binging of Six Feet Under and I had given up on the idea of love. Romantic love. The kind of love people write about and sing about and commit crimes about.

There was one, once, that had been love until, I discovered, he loved a lot of women … at the same time … without them knowing. That could be love – it’s just not my kind of love. The one I thought might have been love wasn’t love. Not even close. He belittled my music choices and stole my washing machine and forgot my birthday. That isn’t love. I was done.

I was staying in my mould-ridden studio apartment, doors locked and blinds closed because of the strange man who camped out on the balcony opposite and would look directly into my bedroom slash lounge room slash kitchen. He argued with his wife and liked to sing the national anthem. She would kick him out and he would create a tent, string up sheets and towels across the balcony and sit underneath it, crossed legged on a little cushion and shout “my life, my life” over and over like some sort of mantra. Some days I felt like doing the exact same thing.

And she said, as mothers do, someone will come along when you least expect it and it sounded like something she had heard in a rom-com starring Meg Ryan and I said I don’t need anyone –

I am totally fine with this –

I am a strong, independent woman –

and I was offended even though I knew she meant well because she is my mother and she loves me and I love her. I know she loves me because she tells me. Growing up, she told all of us numerous times a day – I love you – just in case we died, tragically, bam, gone, just like that. She never would have forgiven herself if she hadn’t said it; if she didn’t know that we knew she loved us.

My family were across the desert and sent their love in pixelated Skype calls once every couple of weeks.

Love you, they would say at the end of the call because what can you say after that?

It was becoming difficult to leave the house. I turned up when I had to turn up. And I smiled and laughed and drank too much wine and would go home in taxis and tell the drivers my boyfriend was waiting for me at home because you have to do that sort of thing sometimes.

Here’s where I don’t want you to misunderstand me. I wasn’t sad because I didn’t have a boyfriend. I wasn’t lonely because I was divorced. I wasn’t empty because I hadn’t eaten.

This was just me back then. Disappearing.

Until someone saw me.

He had nice shoulders and wore great shirts and had a whole face smile and easy laugh and he was taking me on a date and I had no idea what that meant, not really, but I turned up late and we took it from there.

And then I started to fall in love with him and could only hope he was falling in love with me. Even though I knew I wasn’t meant to. Even though I knew the “timing was bad” and I should be “keeping my options open” and “seeing other people” and just being “chill”. Whatever that means. Falling in love makes you vulnerable and stupid and happy and distracted and it is awful and wonderful all at the same time.

I tried to hide the real me as I fell in love with him but I would trip upstairs and lock myself out of restaurants and collapse as elegantly as possible into the gutter and I was always late or changing my mind and he wondered why I wasn’t hungry again and he just kept on looking and watching and seeing me.

But I wasn’t ready. I didn’t want anyone to see me. Instead, I tried to make myself as small as I could. Just small enough, you see, nothing crazy – I would know when it was getting crazy. I had this under control.

There I was, watching myself from afar, being in love and going through all the crazy-crazy whirlwind romance stuff and feeling elated and hungry and fat and ugly and gross and anxious and miserable.

I was living alone.

I was turning up when I had to.

I was holding my breath and waiting for him to run.

But he didn’t. He started cooking dinners. And put avocado on English muffins for breakfast. And made protein filled lunches.

Love found me. It noticed.

Love became doctor appointments and specialists and therapists and waiting rooms and The Age quiz and driving and feeding the parking metre and celebrating small victories with champagne and eating and swimming and saying you’re beautiful even if its not quite true and an old camera and space and time and listening, really listening.

It was being seen.

I got better, so much better and I’m always getting better because of him and that love. I would have disappeared without it.

As George Elliot wrote “Blessed is the influence of one true, loving human soul on another” – love deserves its praise because that one true, loving soul can encourage us to grow and heal and get better – maybe even save us. Isn’t that what love is about? Maybe?

This monologue was presented at The School of Life’s Symposium: In Praise of Love. I spoke in praise of love and then posed my question to create conversation amongst the audience. It was exhilarating and terrifying – a bit like falling in love …