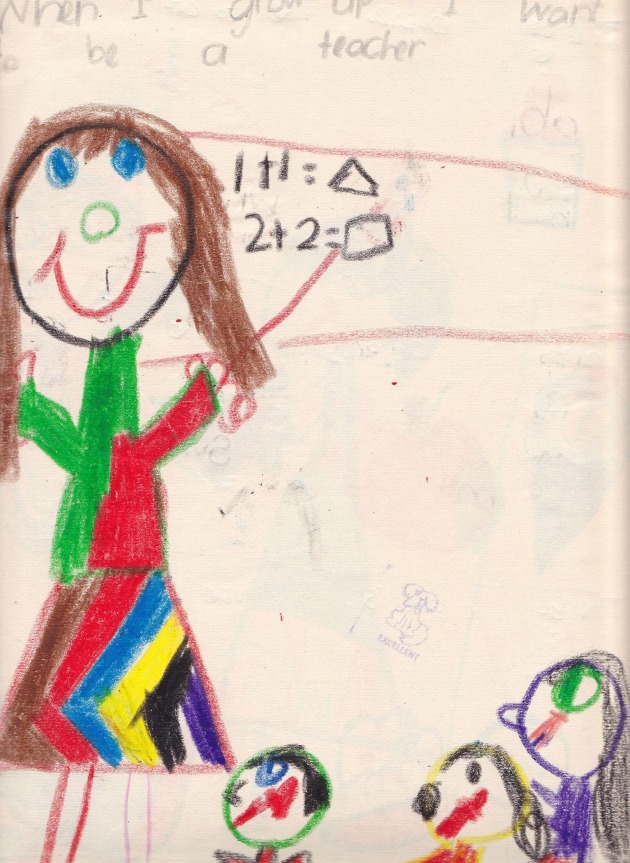 “When I grow up I want to be a teacher” by me, aged 6 (1986)
Actually, I wanted to be a gypsy or a racing car driver but I went with the safe option for my grade 1 scrapbook.

How the hell did this happen?

I mean, obviously, we get older. Mum always says, “I’d rather be old than the alternative”. By “alternative” I assume she means dead rather than not-ageing-but-staying-in-the-blissful-carefree-stage-that-is-your-twenties. If the latter were the alternative then I would be going for that. Anyway, my Mum also says she’s just “visiting her aunt” when she heads off for the bathroom, so I don’t know how seriously I can take these little sayings of hers. (I love you Mum.)

Back then, when I’d say I was 10 but I was actually 9, it wasn’t because I wanted to be older. There was just something more interesting and exciting about the year ahead. What would 10 bring that 9 just couldn’t comprehend right now? In reality it brought nothing but the wonderful butterfly cupcakes Nan would make for our birthday parties. They were amazing. I wish I could recreate that. Surely I should be able to bake by now? Be able or, at the very least, interested in baking? I am 33 after-all.  Who am I kidding? I don’t bake and I’m OK with that.

I had no desire to get older. I got quite upset after receiving clothes for Christmas one year. I think I was 10 but telling everyone I was 11. It wasn’t like the clothes were awful, it wasn’t as if I didn’t like them … but Christmas presents were meant to be toys, right? Getting clothes meant I was getting older. Only kids got toys for Christmas. If I didn’t get a toy I was no longer a kid. I wasn’t ready for that. Mum said I’d love to get clothes one day … she was right, of course, and the next year I forgot all about the no-toys-for-Christmas saga and desperately wanted a denim jacket. So it goes.

Whilst I hadn’t wanted to be older, I had always looked forward to being sixteen. “Sixteen”: mythologised in popular culture and American teen books where the kids are all rich and drive sports-car and hang out at the beach or the local diner. The fact that we weren’t rich, that there was no way in the world my parents would let me get in any car driven by any teenager and that diners weren’t really a “thing” in Australia did not deter my somewhat clichéd imagination. I was dreaming of this sixteen year old version of me when I was only 12 and reading way too much Sweet Valley High. At this age I also read George Orwell’s Animal Farm and 1984, delved into The Odyssey of Homer and got through many of Shakespeare’s plays and sonnets – sadly it seems that Francine Pascal’s awful trite influenced my somewhat impressionable mind a little more than Orwell at that point in my life.

Anyway, despite being pretty well read, I thought sixteen was going to be this amazing year full of school dances and high-school romances and hanging out and eating pizza with my friends and first kisses and fun-fun-fun. I pretty much thought it would be just like Beverley Hills, 90210 – the fun parts, not the serious, issue-based stuff, and I’d be Kelly Taylor, of course …

As the wonderful 16 got ever closer I like to think I matured enough to know it wouldn’t, couldn’t and, possibly, shouldn’t be like that. I am sure I knew but a little, tiny part of me still dreamed of this Hollywood version of sixteen. When the day came I had a little party with my friends. Most of them left early because there was a bigger, better, non-supervised party with a bonfire and older boys and beer happening within walking distance from my place. It wasn’t the Sweet Sixteen birthday party John Hughes had led me to believe I would have. The all magical sixteen wasn’t as magical as I thought it would be. There was a lot to deal with; heaps of homework, exams, simply surviving every day at my terrible high-school, bitchy girls, idiotic boys – there was reality.

Naïve, optimistic, sixteen year old me doesn’t seem all that long ago. She is not a distant memory. She was only … nope, hang on, she was 17 years ago. How the hell did that happen? Where did the time go? And why do I still have the exact same hair-cut?

So, it was with surprise that I read the casting brief for a woman in her 30s – 40s. I had to stop and think … surely they have sent this to wrong person? But, no, my agent can do math – that is my “age range” now.

And I was OK with it, I think.

I mean, I never wanted to grow up but here I was – suddenly in shoved into the 30s – 40s bracket and that was OK. It was actually OK.

Until the meeting with the literary manager of some theatre company.

She wanted to talk to me about my work and I was thrilled. It was going well, until she asked me how old I was. I answered, honestly because, well, I hadn’t thought anything of it. “Don’t tell anyone that,” she said in this hushed tone. “You’re not as impressive now I know how old you are.” That was my chance to interject with a comment dripping with wit – it didn’t happen. “We thought you were some kinda child prodigy thing or something,” she laughed and the meeting was over. I never heard back from them.

So, what’s wrong with being in your 30s? I’d rather be old than the alternative … thanks Mum. Being in your 30s doesn’t make you old. 30s is the new 20s which makes 20s the new teens and, as much as I thought I wanted to be sixteen, I wouldn’t be going back there in a hurry.

Of course there isn’t an expiry date. Of course not. Well, there is that one big expiry date but there’s nothing I can do about that one … People will always have different perceptions on age – different expectations they place on somebody based merely upon the year they happened to be born. Well, let them. You are only as young as you feel, that’s what they say, right?

There seems to be this idea of what you should have achieved and by when. Just like all the pressure I put on the idea of being sixteen – at sixteen year old I should [insert implausible scenario from awful teen film here] – now it is the pressure of what I should have achieved in my 20s (but didn’t) and what is expected of someone in their 30s (which makes me incredibly anxious) and on and on it goes until you are in your 90s and then you can do whatever the hell you want and no one can say a word because you are 90, damn it (except maybe the people in the 100s).

Age is just a number, right? A concept. Aren’t we all just deceived into this perception of past, present, future? Isn’t everything happening all at once? Aren’t there scientists who believe there is no such thing as time? Einstein told believed that

the separation between past, present, and future is only an illusion, although a convincing one.

I may not be doing what people are “supposed” to be doing in 30s. I may not have achieved all those things I was “supposed” to achieve in my 20s. And I will be OK with that.

And I will start looking forward to my 90s. That sounds like a fun age to me.