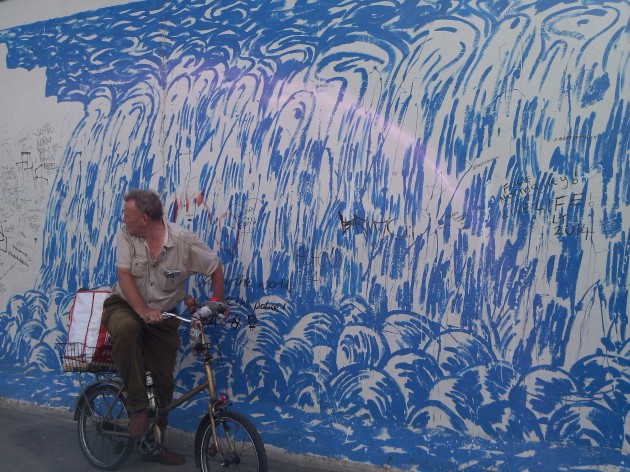 I am not cool. It has not and will not ever be a word I could associate with myself. I mean, it is a dumb word anyway, when you think about it … Cool. And we say it far too often. Regardless. Cool is cool and I am not that. Berlin, on the other hand, is the epitome of cool. At least, it seemed that way to me which is why I had assumed we just wouldn’t, you know, hit it off …

I had no intention of making Berlin The Place. New York, yes. Paris, obviously. But Berlin?

On my first night in Berlin I dreamt of an old man selling fruit. I say dreamt but he was standing right beside me. He didn’t know I was there.

There are ghosts all over this city.

The ghosts and the people live side by side.

From my little apartment I can hear them all. It’s a noisy street. Traditional Turkish music mixes with the chimes of church bells. Apartment buzzers buzz. High heels click on cobblestone. Talking. Laughter. Clinking of beer bottles. Kids throwing tantrums (which sound the same in every language).  Cars parallel parking. Double parking. Sirens (which sound different in every language).

On my street, like many other streets in Berlin, are kindergärtens. I see dads and mums dropping their kinder off in the morning. They don’t just drop and run. They ride in together. Walk in together. Converse together. Together.

On my street, like many other streets in Berlin, are informal gatherings at little tables and chairs set outside little shops. They drink and smoke and chat with the shop-owner, who keeps half an eye on the store.

On my street, like many other streets in Berlin, people tumble out of clubs at all hours. No one minds.

On my street, like many other streets in Berlin, is a stolperstein. A stumbling block. A brass plate set in the cobblestone to commemorate a victim of the holocaust. On my street is Johann “Rukeli” Trollman. On another are the families Adler and Heilfron. On another is Max Bayer.

Here is the Berlin Wall.

And the Brandenburg Gate. And The Fernsehturm. And Karl-Marx-Allee. And Alexanderplatz, Friedrichshain, Kreuzberg, Mitte …

Here is green space and parks and the river Spree and people using them. Here are big people, small people, overweight people, thin people, all people riding bikes. Everyone. Everywhere.

Here is the U-Bahn and the S-Bahn. Frequent and on time. Here is public transport where the most difficult thing to deal with is pronunciation.

Here is me feeling like me in a place where I don’t speak the language. All I can say is Sprechen Sie Englisch and Nein and Ja and Schwarzer Kaffee and Hallo (which is German for hello) and Ciao (which is Italian and Berlin for goodbye). I know that zahnfleischschutz is toothpaste but I have no idea how to say it.

Here I pack my own groceries into my own bag. Here nothing is open on Sunday. Here I leave my empty bottles outside the bin so those who collect them for cash don’t have to rummage through the rubbish to find them. Here I lie to the gypsies who ask me if I “speak English?” and feel terrible about it.

Here I meet writers and artists and people not from here. Here I sit with writers from Egypt and Italy and Munich and Hong Kong and the UK and USA. Here we sit amongst the tumbling bookshelves, the rising damp, the lamplight in the basement of the bookstore. We talk about writing. We write. We watch films. We drink. We listen to stories about the East and the West. And the Wall. My tutor smokes, inside, amongst the paperbacks and I try not to plan my evacuation route. They make me realise, without doing anything in particular, how big the world is …

Here I try to eat my lunch but instead get told off by two old East Berliners for not following the rules: You Can’t Eat Here. I smile. They do not.

Here are thunderstorms in the late afternoon and warm evenings and bright mornings.

Here is The Place.

Now that I am back here, which is away from there, I am the ghost – wandering the streets of Berlin in my dreams. I stand next to an old man selling fruit. He still doesn’t know I’m there.